Some materials for inspiration. Pick one or all of them to use.

The death of Elizabeth of York.

Richmond Palace was largely a building of brick and white stone in the latest styles of the times, with geometric octagonal towers, pepper-pot chimney caps, and ornate weathervanes made of brass.[9] Though it retained the layout of Sheen Palace (destroyed in a fire in 1497), new additions that would mark the Renaissance were to be found in this palace, for example, long galleries to display sculpture and portraiture. The windows were panelled, built to bring in more light than the tiny slit-like windows of a castle, built for defence. From its earliest it had inner courtyards designed for leisure, with several portions built for the royal family overlooking a large green. Richmond Palace covered ten acres of land and was large and well appointed enough to have its own orchards and walled gardens. It is known that Henry Tudor decorated his home with many gifts he accepted from Italian bankers in Venice, and the evidence for this and the other accoutrements survives in a 17th-century inventory taken of the palace that is now located in the British National Archives. The inventory also describes new tapestries he commissioned to replace the ones lost in the fire. A section from THE LIFE OF CARDINAL WOLSEY.

Thus in great honour, triumph, and glory, he reigned a long season, ruling all things within this realm, appertaining unto the king, by his wisdom, and also all other weighty matters of foreign regions, with which the king of this realm had any occasion to intermeddle. All ambassadors of foreign potentates were always dispatched by his discretion, to whom they had always access for their dispatch. His house was also always resorted and furnished with noblemen, gentlemen, and other persons, with going and coming in and out, feasting and banqueting all ambassadors diverse times, and other strangers right nobly. An audience with Elizabeth I, 8 December 1597

On the 8th of December I did not think to be given an audience for that day and was resolved to make my complaint; but about one hour after noon there came a gentleman from the Queen who said to me that her Majesty was much grieved that she had not given me audience sooner, and that she prayed me to come to her that very hour. He brought me in a coach to take me down to the river where one of the barges awaited me, and we went thence to the gate of the Queen’s palace. At our landing there came to seek me a gentleman who spoke very good Italian, called Monsieur Wotton, who told me that her Majesty sent word that I should be very welcome and that she was awaiting me. He had four or five other gentlemen with him. As he led me along he told me that the whole Court was well satisfied to see me, and that they knew well how greatly I loved their nation, and that in Italy I had done all that I could for them. I told him that I was very sorry that I had not done more; and that what had been done was by the command of the King, who wished me in all that concerned the Queen of England to busy myself as much as in his own affairs.

He led me across a chamber of moderate size wherein were the guards of the Queen, and thence into the Presence Chamber, as they call it, in which all present, even though the Queen be absent, remain uncovered. He then conducted me to a place on one side, where there was a cushion made ready for me. I waited there some time, and the Lord Chamberlain who has the charge of the Queen’s household (not as maître d’h?tel , but to arrange audiences and to escort those who demand them and especially ambassadors), came to seek me where I was seated. He led me along a passage somewhat dark, into a chamber that they call the Privy Chamber, at the head of which was the Queen seated in a low chair, by herself, and withdrawn from all the Lords and Ladies that were present, they being in one place and she in another. After I had made her my reverence at the entry of the chamber, she rose and came five or six paces towards me, almost into the middle of the chamber. I kissed the fringe of her robe, and she embraced me with both hands. Se looked at me kindly, and began to excuse herself that she had not sooner given me audience, saying that the day before she had been very ill with a gathering on the right side of her face, which I should never have thought seeing her eyes and face: but she did not remember ever to have been so ill before. She excused herself because I found her attired in her nightgown, and began to rebuke those of her Council who were present, saying, “What will these gentlemen say?” – speaking of those who accompanied me – “to see me so attired? I am much disturbed that they should see me in this state.”

Then I answered her that there was no need to make excuse on my account, for that I had come to do her service and honour, and not to give her inconvenience. She replied that I gave her none, and that she saw me willingly. I told her that the King had commanded me to visit her and to kiss her hands on his behalf, and charged me to learn the news of her well-being and health, which (thanks be to God) I saw to be such as her servants and friends would desire; and which I prayed God might continue for long years, and in all prosperity and dignity. She stood up while I was speaking, but then she returned to her chair when she saw that I was only speaking of general matters. I drew nearer to her chair and began to deal with her in that wherewithal I had been charged; and because I was uncovered, from time to time she signed to me with her hand to be covered, which I did. Soon after she caused a stool to be brought, whereon I sat and began to talk to her.

She was strangely attired in a dress of silver cloth, white and crimson, or silver “gauze” as they call it. This dress had slashed sleeves lined with red taffeta, and this was girt about with other little sleeves that hung down to the ground, which she was for ever twisting and untwisting. She kept the front of her dress open, and one could see the whole of her bosom, and passing low, and often she would open the front of this robe with her hands as if she was too hot. The collar of the robe was very high, and the lining of the inner part all adorned with little pendants of rubies and pearls, very many, but quite small. She had also a chain of rubies and pearls about her neck. On her head she wore a garland of the same material and beneath it a great reddish-coloured wig, with a great number of spangles of gold and silver, and hanging down over her forehead some pearls, but of no great worth. On either side of her ears hung two great curls of hair, almost down to her shoulders and within the collar of her robe, spangled as the top of her head. Her bosom is somewhat wrinkled as well as one can see for the collar that she wears round her neck, but lower down her flesh is exceeding white and delicate, so far as one could see.

As for her face, it is and appears to be very aged. It is long and thin, and her teeth are very yellow and unequal, compared with what they were formerly, so they say, and on the left side less than on the right. Many of them are missing so that one cannot understand her easily when she speaks quickly. Her figure is fair and tall and graceful in whatever she does; so far as may be she keeps her dignity, yet humbly and graciously withal.

All the time she spoke she would often rise from her chair, and appear to be very impatient with what I was saying. She would complain that the fire was hurting her eyes, though there was a great screen before it and she six or seven feet away; yet did she give orders to have it extinguished, making them bring water to pour upon it. She told me that she was well pleased to stand up and that she used to speak thus with the ambassadors who came to seek her, and used sometimes to tire them, of which they would on occasion complain. I begged her not to overtire herself in any way, and I rose when she did; and then she sat down again, and so did I. At my departure she rose and conducted me to that same place where she had come to receive me, and again began to say that she was grieved that all the gentlemen I had brought should see her in that condition, and she called to see them. They made their reverence before her, one after the other, and she embraced them all with great charm and smiling countenance.

Source: Journal of an Embassy from Henry IV to Queen Elizabeth I, 1597, translated by G B Harrison and R A Jones, Nonesuch Press, 1931. 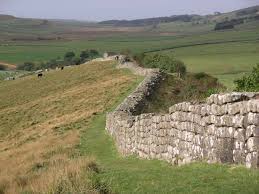 Hadrian’s Wall
Letter from Charles Brandon, Duke of Suffolk, on his marriage to Mary Tudor, sister of Henry VIII.

The youth of Henry VIII;