Day 9 of the Blog Each Day in August Challenge, today’s topic: A regret.

I’ve fallen way behind with this blog challenge, but I have good excuses – I’ve just spent the last few days writing a ten-minute play so I would have something to enter into the Eltham Little Ten Minute Quickie Play Competition at the end of the year. I am also trying to ready a new section for my next PhD meeting at the end of the month. I think it is best to be realistic, and regretfully bow out from writing up a post every day for 31 days. As it is, I am going to cheat for day nine, and instead of writing about five songs that bring back memories (the task for day seven), I will share with you something I wrote recently, when I was asked to name the books I will never cull from my bookshelves: My comfort book, first read as a teenager, and not long ago replaced because of multiple re-readings. Set in early Britain, it tells the story of Aquila, a young man who sees the destruction of his life and family during the Viking invasions of England. With his father killed on the doorstep of their home, Aquila’s last sight of his struggling sister, Flavia, screaming out his name, is over the shoulder of the same Viking who orders his men to tie him up as living meat for wolves. Hearing a final, dreadful scream from his sister, Aquila thinks the worse, not realising the Viking chief has claimed her as a war trophy. Aquila in turn becomes a trophy of war, when his dolphin tattoo catches the eye of the leader of another Viking band. He escapes his terrible night of bondage to terrible years of slavery.

Flavia is the haunting force driving this novel. Whilst her brother’s journey to healing and redemption takes place through a physical and mental journey, which sees him resume his role as a leader of men, Flavia’s unwritten journey is that of the “other”.  Female, her journey is hidden, internal, private and personal.

An ode to the unvanquished human spirit, The Lantern Bearers recounts a story of healing and redemption.

I have learnt my lesson. I will never ever loan this book out again because it never gets returned. The third copy is on my bookshelf and will – unless I’m reading it – stay there. Set in the times of Socrates and the Peloponnesian War, Alexias journeys into adulthood – taking up the mantle of human love and hate, suffering, adversity, triumph and joy. At its core is a heartbreaking love story between Alexias and Lysis, which is also plays an important part of Alexias’s quest to discover “who am I?” I would love to write a film script of this novel! 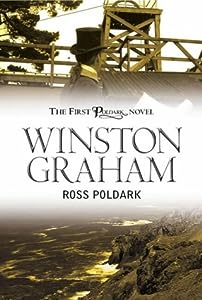 3: What books would I want with me on a desert island?  The Poldark saga by Winston Graham:

Superb story construction and unforgettable characters – including that of Cornwall itself – makes these novels such satisfying reading. Set in the Napoleonic era, the story begins with the young Ross Poldark returning home from serving in the American wars of Independence, only to discover that the woman he loves is engaged to his richer cousin. That’s the only the beginning of his troubles. The reader follows Ross through the years, from a young, disillusioned man to a man in his fifties with many reasons to be satisfied with his life. Graham, though, does not spare Ross and gives him a life of joy and sorrow, which includes the heartbreak of losing children. By then, I was so involved in Ross and his wife Demelza’s story that those pages are spattered with my tears. As for bringing a period alive again – Graham is an absolute master.

I enjoyed the film so I bought the book and found I enjoyed it even more. An American from the “South” wrote this novel, which helps explain the perfection of syntax and voice that carries this story. While it tackles powerfully the themes of racism and oppression (of both black women and white), it is also written with great love and sensitivity of a time and place that was obviously part of the author’s own history.

This novel just goes to show the timelessness of a wonderfully wrought tale. Eliot’s understanding of the human condition is awe-inspiring and she writes so insightfully about the relationship between men and women. Elliot’s closing words about her main character Dorothea really struck home for me: