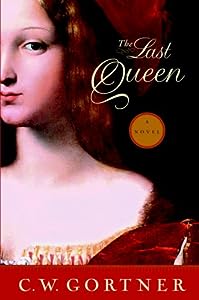 Cover of The Last Queen: A Novel

Ah – the magic spell of a powerful, wonderfully written historical novel like The Last Queen: A Novel Treading on the edge of my consciousness even when forced to put the novel down, The Last Queen invaded my dreams, taking me over both night and day.

Welding history into believable and well crafted fiction takes not only writing talent, but also the ability to keep a reader so engrossed in the story they remain time travellers, oblivious to all the research needed to write a good historical novel. It is not an easy feat to achieve, but C.W. Gortner is an author whose skill as a story-teller makes it seem easy. Passion for history firing his every written word, C.W. Gortner draws his reader into his historical worlds with all the certainty of a skilled magician. .

Gortner’s narrator is Juana herself – a vivid, forceful and haunting character. The second, and most beautiful, daughter of Isabel of Castile, Juana is the daughter most able to take upon herself the mantle of her mother, one of the most powerful and competent Queens known in history. Here lies the seeds of Juana’s doom – those closest to her would rather see Juana broken rather than let her succeed her mother. They want to keep the power in their own hands. Juana displays her attributes for Queenship from girlhood. For her beloved country, she is willing to sacrifice and serve. Juana’s first sacrifice happens at just sixteen, when the needs of Castile call for marriage to Philip the Fair, taking her far from family and home.

For a time, this sacrifice proves a happy one. Juana falls in love with her young, magnetic but also very flawed husband. Juana’s love is strong enough to withstand his unfaithfulness and political games taking him further away from her.

The years pass. Philip no longer sees Juana other than a daughter of Spain and his captured political pawn – to do with what he wills. It means nothing to him that he destroys her love for him. Betrayed over and over, increasingly used and abused, her body treated as a means to end, controlled and weakened by sex, pregnancy and childbirth, by the time Juana reaches her early twenties she must do all that she can just to survive. She becomes the ultimate queen by thinking first to safeguard Castile.

The Last Queen: A Novel tells a story of great heartbreak and tragedy. In Gortner’s extremely competent hands, Juana’s breakdown into a brief time of madness is not one of genetics (as her enemies claimed) but one brought into being by the last shattering betrayal. An unforgettable novel, The Last Queen forcefully depicts the corruption of power and how it erodes away at humanity until nothing is left but pure evil.